Aptamer Group, a York-based biotechnology company, has demonstrated the strength of the sector in the North of England with the appointment of six new scientists.

Aptamer Group is developing a COVID-19 test that will generate results within seconds, supporting the government’s ‘Moonshot’ strategy plan to beat the virus. It is also working in parallel on many important diagnostic and therapeutic targets to support its customers and collaborators, including Cancer Research UK and AstraZenica to develop targeted drug delivery for kidney disease.

“I am delighted that we have not only been able to attract Stephen to work in the region, but retained the talent of five young scientists in the north of England. Their diverse knowledge and skills will be of great benefit as we work to deliver aptamer-based solutions for a wide variety of pharmaceutical, biotechnology and diagnostic customers, as well as academic and research institutions across the world.”

Joining Aptamer Group as a molecular biologist, Dr. Stephen Bentley gained a B.Sc. (Hons.) with distinction in Biotechnology, followed by a Ph.D. in Biotechnology from Rhodes University in Grahamstown, South Africa. Dr. Bentley then carried out postdoctoral research with Professor Rusian Aphasizhev at Boston University’s Henry M. Goldman School of Dental Medicine. He has co-authored a number of scientific papers in his career to date.

Claire Jones graduated from York University with a B.Sc in Biology (with a year in industry) and gained valuable experience working at Smither laboratory in its Ecotoxicology department. She joins the Aptamer Group team as a selection scientist.

Callum Robson gained a B.Sc.(Hons.) in Biochemistry from the University of Huddersfield where he undertook an undergraduate research project on the effects of ABC transporter inhibition on neuroblastoma cell biology. His role at Aptamer Group will be working as a molecular biologist in the Interactions team He has previous experience working as an analytical chemist in the food industry.

After two years as a research technician at The Jack Birch Unit for Molecular Carcinogenesis at the University of York, Olivia Foody takes on the position of cell scientist. She is a graduate from Sheffield Hallam University with a B.Sc. (Hons.) in Biomedical Science and an M.Sc. (Hons.) in Molecular and Cell Biology.

Dr. Matthew Thompson will be working on new and exciting ways to use aptamers in his role as a research and development scientist. He studied for his degree in Biomedical Sciences at the University of Durham and holds a Ph.D. in Molecular and Cell Biology. He also has two years biotech industrial experience, automating assays for lab on a chip technology.

Lauren Webster graduated from the University of York with a B.Sc. (Hons.) in Biochemistry (with a year in industry), undertaking her industry placement at MicroGen Biotech in Carlow, Ireland. She joins Aptamer Group as a junior R&D scientist working in the R&D team. Lauren’s previous experience includes human skin cell and tissue culture work, creating human skin equivalents, for testing purposes and examination of the resulting histological tests. She has also worked on environmental science projects such as developing bioremediation products for heavy metal contaminated farming land, and analysing proteins from a bacteria that can metabolise the water contaminant metaldehyde. 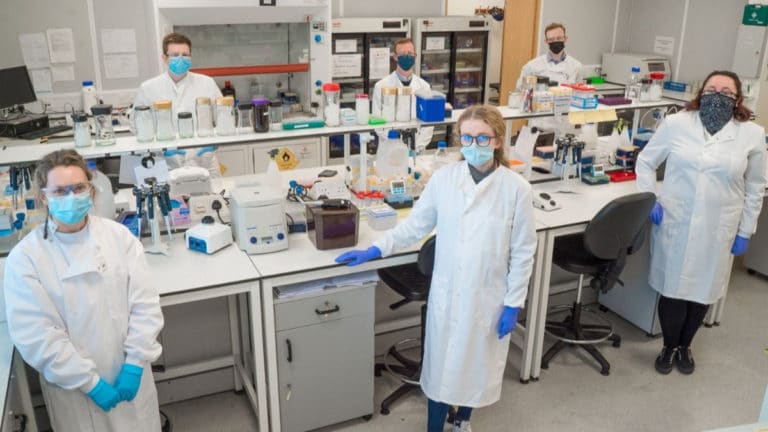