As SARS-CoV-2 continues to mutate we demonstrate the performance of Optimer reagents to the South African, UK and Danish variants.

In the summer of 2020 we focused our rapid Optimer development platform on delivering reagents for the SARS-CoV-2 spike and nucleocapsid proteins to help beat COVID-19. As the pandemic has evolved, mutations in the virus have emerged. These new strains of SARS-CoV-2 are in some instances more virulent and worries have arisen about their spread, detection and the potential of the approved vaccines to tackle these new variants.

Why do SARS-CoV-2 tests need to detect the new variants?

Many countries are using rapid antigen tests to help track and prevent the spread of the coronavirus, while public health officials rush to vaccinate. But to ensure proper detection within communities it is important that all tests being used not only recognise the original wild type (WT) virus but all subsequent strains too. If the affinity reagents used in these assays fail to detect the new variants, any tests that rely on such reagents would no longer recognise the most virulent strains. This could lead to another spike in COVID-19 case numbers and many more deaths. At worst, higher transmission rates may give the virus a chance to mutate further and result in the vaccines being ineffective.

At the start of February, our Optimer reagents to SARS-CoV-2 recognition binding domain (RBD) were shown to bind both the WT and new highly virulent UK mutation with similar performance. Any assays based on these reagents would be able to detect individuals with the new UK SARS-CoV-2 variant.

In tests our SARS-CoV-2 S1 Optimers show the ability to bind to the spike (S) protein and the irradiated virus samples from each of the SARS-CoV-2 variants.

To examine the binding of the S1 Optimer to each of the SARS-CoV-2 variants we monitored the interaction with the specific mutant S1 protein subunit using BLI. The coronavirus S protein is divided into two domains: S1 and S2. The S1 domain mediates receptor binding and the S2 mediates downstream membrane fusion. 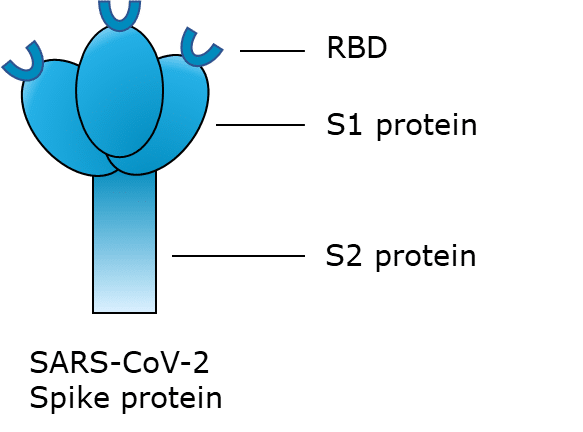 The SARS-CoV-2 spike protein is composed of two subunits: the S1 subunit that harbors the receptor binding domain (RBD) and the S2 subunit that anchors the spike to the viral envelope and following activation enables host cell fusion.

The S1 Optimers were able to bind to all four of the SARS-CoV-2 variants. This shows that the S1 Optimer is targeted to an epitope away from the site of major mutations within the S protein. Though there has been many fears of the potential for these novel mutations in SARS-CoV-2 S protein to allow the virus to evade detection by diagnostics and potentially reduce the efficacy of the vaccines, the S1 Optimer is not targeted to the current site undergoing mutations in the SARS-CoV-2 protein, and so should continue to recognise the variants of this virus, when used in various research and diagnostic assays. 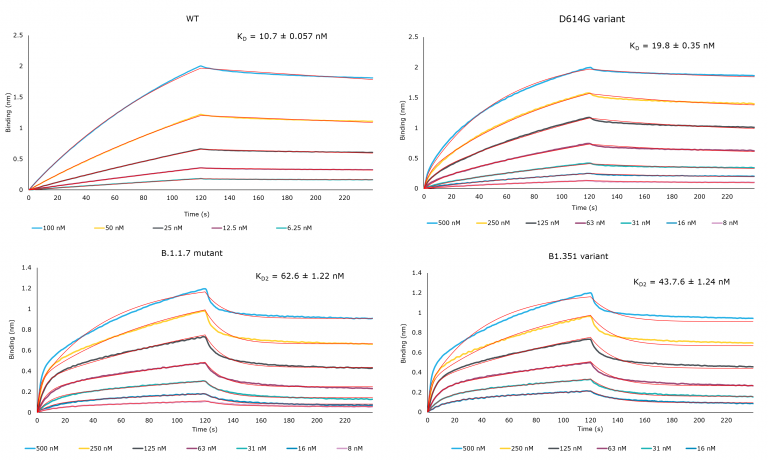 Biosensor analysis of SARS-CoV-2 S protein variants and WT with S1-specific Optimer shows the Optimers recognize the WT, D614G, B.1.1.7 and B.1.351 variant forms. BLI streptavidin probes were coated with 20 nM biotinylated Optimer, washed and the interaction measured in 80 μl of the target protein in buffer over the concentration range shown.

The S1 Optimer showed approximately equivalent binding affinity for each of the SARS-CoV-2 variants, suggesting that the Optimer reagents should show similar interactions with each of the mutants for equivalent assay performance.

Affinity of the S1 Optimer to the SARS-CoV-2 variants shows similar binding kinetics to the WT and all three variant S proteins. KD values were determined for the WT and D614G mutants, and KD2 values for the B.1.1.7 and B.1.351 mutants.

KD values have been calculated for the WT and D614G prevalent mutant For the UK, B.1.1.7, and S.African variants, B.1.351, KD2 values were calculate. As can be seen from the BLI traces, the curves for both the UK and S.African variants show two phases – an initial quick on/off rate followed by a slower phase. This could represent an initial binding to the S1 target protein, followed by a target ‘locking’ phase, where the Optimer binds more tightly to the epitope. However, further structural studies would be necessary to determine the precise interactions underlying this observation. Nonetheless, as the S1 Optimers were seen to interact with similar affinity for each of the variants, assay performance for the detection and quantification of these reagents can be assured.

In addition to the maintained performance of the S1 Optimer with regards to the SARS-CoV-2 variant forms, we have also developed a further Optimer to the S2 subunit of the S protein, that can be used as a sandwich pair for the detection of SARS-CoV-2.

There have been limited reports of mutations in the S2 protein, and these mutations have not been associated with significant changes in the infectivity or virulence of SARS-CoV-2. The extra specificity delivered through the use of the S2 Optimer within a sandwich pair, adds further reassurance regarding the detection of SARS-CoV-2 variants in experimental and diagnostic samples.

Irradiated virus samples are used in testing labs around the world, for basic research and analysis of diagnostic tests and in vaccine development. This is an inactivated form of the virus that can be safely used in standard laboratories without risk of infection. The analytical performance of SARS-CoV-2 antigen tests is initially verified using irradiated virus prior to clinical validation with patient samples.

When tested with irradiated virus within Aptamer Group laboratories, the SARS-CoV-2 S1 and S2 specific Optimers showed binding to the WT, the ‘Kent’ variant and also the South African strain of the virus. 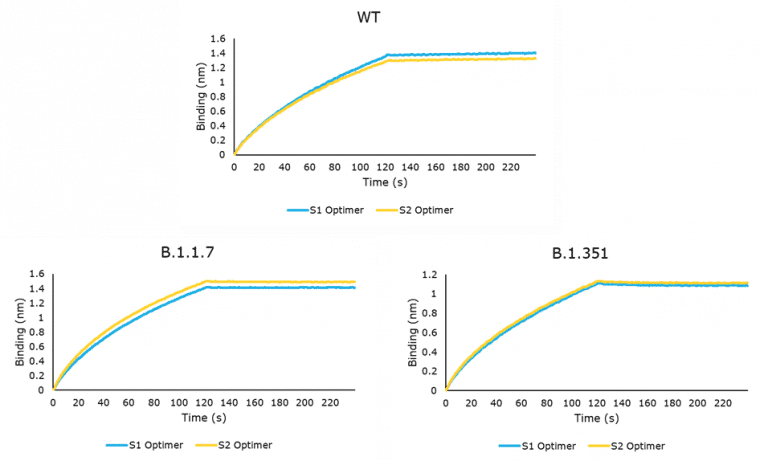 Biosensor analysis of SARS-CoV-2 variants and WT with S1- and S2-specific Optimers shows that each of the Optimers in the matched pair recognize the irradiated virus of the WT, B.1.1.7 and B.1.351 variant forms. BLI streptavidin probes were coated with 20 nM biotinylated Optimer, washed and the interaction measured in 80 μl of the target protein in buffer over the concentration range shown.

Clear binding was seen to all three of the irradiated virus samples of the SARS-CoV-2 variants by biolayer interferometry (BLI), showing that any assays and tests based on these Optimers will be able to detect each of the WT, UK and S.African SARS-CoV-2 strains in analytical tests.

For more information regarding the performance of our SARS-CoV-2 Optimers to S1, S2 and nucleocapsid proteins in biosensor and ELISA formats download our application note or contact Aptamer Group below.