Oligo therapeutics vs ADCs. How do they stack up?

Biologics, such as antibody therapeutics have revolutionised our approach to the treatment of disease. Therapeutic antibodies have become the predominant class of drugs in the development pipeline and the best-selling drugs in the pharmaceutical market, revealing new treatments for cancer, autoimmune, metabolic and infectious diseases.

With antibody therapeutics now considered an established technology, newer modalities being pursued through the clinic include antibody-drug conjugates (ADCs) and oligo therapeutics. These new therapies offer hope for novel treatments, to improve the therapeutic index of current medicines through improved targeting to specific tissues, and to be able to target previously untreatable diseases that have failed with standard antibody therapies.

Of the next-gen technologies progressing through the clinic, which do you perceive as the most successful? 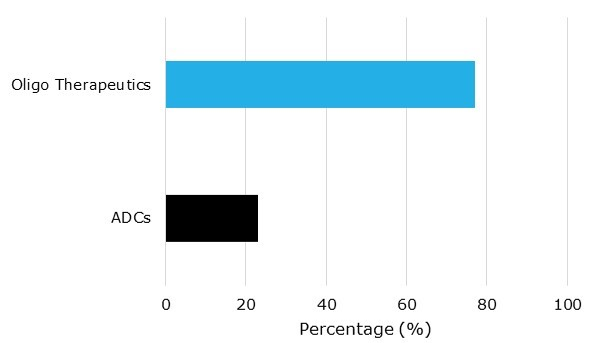 Here we look at these new molecules and examine their progression and successes.

The concept of an ADC is simple; an antibody molecule is attached to a toxic chemotherapeutic payload via a biodegradable linker for targeted delivery to the tumour. This increases the effective dose at the site of action and decreases off-target effects. The primary goal of ADCs is to improve the therapeutic index of the delivery cargo by restricting their systemic delivery to cells that express the target antigen of interest.

After Pfizer launched the first ADC, Mylotarg, in 2000, the field exploded with interest. But, despite the promise of this new ‘magic bullet’ for cancer, it took over 11 years for the next ADC to reach approval. A phase IV clinical trial raised toxicity concerns, which resulted in Mylotarg being withdrawn from the market in 2010. However, it was reintroduced in 2017 after the FDA cleared it at a lower dose for a subset of leukemia patients.

ADCs are often assumed to be the next step for the field of antibody therapeutics. They are beginning to show clear promise in diseases that have been difficult to treat with other molecules, such as solid tumours.

While the concept of an ADC may be simple, developing ADCs is proving far more challenging. More than 50 companies are currently working on ADC development; over 100 ADCs are in active clinical development and over 200 at the preclinical stage. Despite this considerable promise, only 12 ADCs have so far received FDA approval.

All of the approved ADCs use small molecule drugs as cargo to reduce the toxicity of these molecules to non-cancerous tissues. Nonetheless, newer ADCs in development include antibodies conjugated to alternative molecules, such as oligos, to integrate these two technologies and improve the delivery of the oligo therapy to the intended tissue or cell type using target-specific antibodies.

Oligo therapies are maturing as a modality

Oligo therapeutics include a broader category of therapies than ADCs, with antisense oligonucleotides (ASOs), siRNA, and aptamers all representing examples of oligo therapies.

Gene silencing, through ASOs and siRNA, acts to reduce the expression of specific disease-associated genes. These high-precision oligo therapies are typically very potent, allowing for smaller doses than alternative biologics. They interact with their target molecules via complementary Watson-Crick base pairing, so interrogating the putative sequence is relatively straightforward. Highly specific lead compounds can often be rationally designed based on the knowledge of the primary sequence of a target gene. These oligo therapies can be easily applied to precision medicine approaches, as they can be targeted to any gene with minimal or predictable off-target effects. However, despite these advantages, achieving efficient delivery of ASO and siRNA oligo therapeutics, particularly to extrahepatic tissues, remains a major translational limitation.

Aptamers are also oligonucleotide therapeutics that can be used directly as agonists or antagonists or as an antibody alternative for the targeted delivery of specific cargo to the therapeutic site-of-action. Aptamers are selected from libraries based on their ability to fold into 3D shapes and specifically interact with a range of targets types from proteins to small molecules and ions, in the same way as antibodies.

The first approved oligo therapeutic was a 21 nucleotide ASO, fomivirsen, in 1998, which worked by blocking translation. It was approved for the treatment of cytomegalovirus (CMV) retinitis — a severe infection of the retina that can rapidly lead to blindness — in carriers of human immunodeficiency virus (HIV) that exhibited acquired immune deficiency syndrome (AIDS). Though fomivirsen was later withdrawn from the market, in 2001 due to safety issues, its success acted as a proof-of-concept paving the way for the wave of oligo therapeutics that followed.

Although most oligo therapeutics to date have focused on gene silencing, other strategies are being pursued, including splice modulation and gene activation. This could expand the potential target range of these treatments beyond that which is normally accessible to standard drug modalities.

There are currently well over 200 clinical trials ongoing for different formats of oligonucleotide therpaeutics, including ASOs, siRNA, miRNA, aptamers and DNAzymes, and 15 approved oligo therapeutics.

Among the 15 oligo therapeutics approved to date, there has been a focus on hepatic delivery with few extrahepatic successes, due to the difficult nature of targeting these tissues and organs. As a problem commonly cited with ASO and siRNA oligo therapeutics is targeted delivery of these drugs, many are now exploring the potential to use aptamer delivery vehicles to increase the delivery of the therapeutic to the target tissue or cell type.

Aptamer Group is currently working with a number of partners to develop our next-generation aptamers, Optimers, as delivery vehicles for small molecule drugs and oligo therapeutics to target a range of tissues, including haematological cancers and the kidney cortex.

This table does include four different classes of oligo therapeutics; ASOs, siRNA, aptamers and a mixture of single-stranded oligos derived from porcine DNA. The breakdown of the various modalities can be seen in the following pie chart. 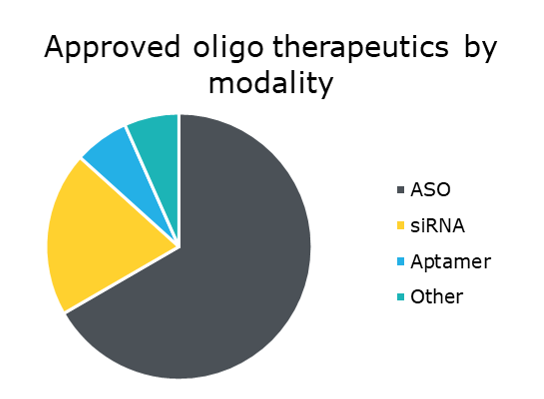 How do ADCs and oligo therapeutics compare?

When considered alone, the maximum number of a single modality is the approval of ten ASOs, two less approved drugs than the number of ADCs.

At Aptamer Group, we are working with key partners across the industry to enable their therapeutic pipelines with the use of our next-generation aptamers as both direct APIs and as delivery vehicles to improve the targeted delivery of a range of therapeutic cargo. If you’d like to find out more about how Optimers could enable your next project, get in touch.

This website uses cookies to improve your experience while you navigate through the website. Out of these, the cookies that are categorized as necessary are stored on your browser as they are essential for the working of basic functionalities of the website. We also use third-party cookies that help us analyze and understand how you use this website. These cookies will be stored in your browser only with your consent. You also have the option to opt-out of these cookies. But opting out of some of these cookies may affect your browsing experience.
Necessary Always Enabled
Necessary cookies are absolutely essential for the website to function properly. This category only includes cookies that ensures basic functionalities and security features of the website. These cookies do not store any personal information.
Non-necessary
Any cookies that may not be particularly necessary for the website to function and is used specifically to collect user personal data via analytics, ads, other embedded contents are termed as non-necessary cookies. It is mandatory to procure user consent prior to running these cookies on your website.
SAVE & ACCEPT